It only took me forever to compile this list. It wasn't because of any apathy or spiritlessness about my film going experience last year. The problem is that Philly isn't like LA and NYC: films, for the most part, don't screen here early. Films that are released in NYC and LA in order to make the early December awards season deadlines often don't open in Philly until 2-3 months later, at the earliest.

2014 wasn't the strongest year cinematically, especially with the relative paucity of features films directed by women in general, people of color or by lesbians. I did see two features by queer women (Life Partners and Anatomy of a Love Scene) and was underwhelmed by both. I'm surprised that I didn't like the Susanna Fogel and Joni Lefkowitz penned and directed Life Partners because I tend to really like their work. ABC Family's Chasing Life, adapted for American TV and helmed by those two, is must-see weekly viewing for me. Too, their web series (Joni and Susanna) is quirky comedy gold. I liken them to Fey and Poehler, but with both feminist and queer sensibilities. Ava DuVernay continues to impress everyone. If you saw her self-written, directed, financed and distributed indie features (I Will Follow and Middle of Nowhere), then you already know her dazzling and timely Selma wasn't a fluke. She really is quite gifted. It's going to be a pleasure to continue to watch her flourish.

There were two film scores that really knocked me off my feet this year. The first is Mica Levi's creepily otherworldly score for Jonathan Glazer's moody, postmodern scifi-verging on horror film, Under The Skin. I love it when a woman composer distinguishes herself like Levi does here. My second favorite score was turned in by Cat's Eyes, a musical team made up of Faris Badwan of the band Horrors and multi-instrumentalist Rachel Zeffira. Their score has a decidedly baroque yet still new age experimental feel to it. It is a perfect compliment to a film (The Duke of Burgundy) whose time period and exact setting seem purposely elusive. My favorites list is in no particular order.

TALK BACK TO ME IN THE COMMENTS BELOW! What did you see or hear (score-wise) in theaters that moved you this year? 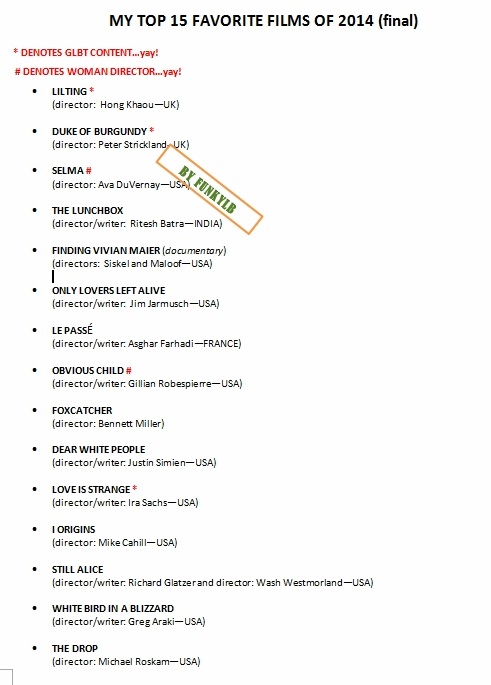